Animals are none other than symbols of our merits and sins floating in our vision, the visible ghosts of our inner selves. God makes them visible to us in order to enthral us. (Victor Hugo)

The Foundation for Epileptic Dogs (EPIKA in abbreviated Hungarian) has been founded for researching the aetiology, symptomatology, and treatment strategies of epilepsy and other neurological and psychological conditions affecting dogs, with special emphasis on their diagnosis, care and treatment.

The aim of the Foundation is to ensure a full and meaningful life for dogs affected with the above conditions, continuing to live as a companion or as a member of a family under an individually tailored, optimal, possibly even a lifelong treatment regime. EPIKA is also aiming at impressing on the lay animal owners and veterinarians interested in these conditions the fact that epilepsy in dogs, as well as in humans, does not constitute a fatal illness, only a pathological condition which may be cured, or at least controlled by medication.

Foundation also aims at impressing on dog breeders the fact that epilepsy could be hereditary and with routine encephalography before their breeding life begins, individuals carrying the genetic basis for epilepsy could be detected and excluded from breeding.

The institutionalisation of such individual pre-breeding screening routine in Hungarian dog breeding establishments is, amongst others, an aim of the Foundation.This is to exclude from breeding the increasing number of individual dogs carrying genetic factors transmitting functional or organic neurological abnormalities potentially evoking epilepsy. To achieve this important mission, the thorough information of dog owners and veterinarians about the fundamental facts of this complex neurological condition is of primary importance. To this end an increasing number of scientific and lay publications and regular refresher courses for veterinarians as well as dog breeders are essential.

We would like through these means to eliminate erroneous beliefs on epilepsy by bringing into focus the basic facts, namely, that in cases of inherited epilepsy the first appearance of symptoms shows a correlation between age and the severity of the condition. The first seizures of inherited epilepsy in dogs appear between the age of 1-5 years, that is just when they fit into the life of a family and become a member of it. The dog has to be destroyed due to the entrenched regular seizures based on inheritance. This emotional stress and financial loss to the family could be averted by preventative routine screening for this condition in the breeding stock of origin.

A further aim is the conversion of the misconceptions about this mythical condition, recognised for thousands of years, not only in the minds of the lay public but also amongst veterinarians. There is a great deal to do in updating veterinary epileptology. The Foundation is naturally determined to carry out this daunting task systematically. 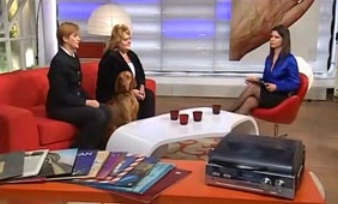 The President of the Foundation, Dr Gabriella Kiss, a private small animal veterinary practitioner, has spent 20 years of unsupported research on the aetiology and treatment of epileptiform malfunctions in dogs. Having learned during these years a great deal about human epileptology, she applied this huge body of information to the veterinary field.

In total she investigated and treated more than 5,000 dogs suffering from epilepsy or similar neurological conditions.. On average 200-300 patients are under her continuous care at a given time in Hungary as well as abroad.

Owners of these patients even to-day give accounts of the attitude of 70-80% of veterinary surgeons approached with their pet suffering from epileptic fits, promptly suggesting euthanasia as the most acceptable solution. This is due to the lack of information on epilepsy given in veterinary training. Sadly this does not only apply to Hungary but also to the most advanced western states. Most veterinarians even to-day follow the outdated treatment concepts from the 1950-s and use100-150 years old preparations of human epileptology world wide, ignoring the modern, far more suitable anti-epileptic drugs.

Dr Kiss has slowly succeeded with dedicated studies and clinical work to gain the acceptance of open minded colleagues of her new approach on epilepsy, by regularly publishing her results on the thorough diagnosis, and on newly perfected treatment schedules with the correct choices of drugs for this condition.

Thanks to her publications, her frequent presentations to lay, as well as professional audiences at Universities, veterinary conferences and in the media (serial television and radio health programmes, periodicals), and her outstanding success rate in the treatment of epilepsy cases, a large body of veterinarians have now taken on board the application of her new concepts and approaches.

The veterinary profession increasingly acknowledges that the “Epileptological Protocol of Kiss ” commands a unique place worldwide in the study, diagnostics and therapy of epilepsy in dogs. In her book of November 2008 entitled “Of Canine Epilepsy to All” she compiles her working experiences during 20 years on epileptic dogs. To illustrate the interest in this book, the first edition was sold out within two months and had to be promptly followed by a second edition.

Apart from the continued information and education of veterinarians , the aim of the Foundation is the construction of a unique Centralised Canine Epilepsy Consultation Network in the mould of similar epilepsy networks in the human field.

We wish to achieve that veterinarians would not treat canine epilepsy cases in isolation, without being aware of the latest drugs and results but as active members and users of this Network. Consultation with Dr Kiss will be continuously available via web-conferences in order that colleagues could confidently treat their epileptic patients instead of offering “the dignified end” to the sobbing owners as the sole solution.

Peter Kolarics – Board of Trustees
2008